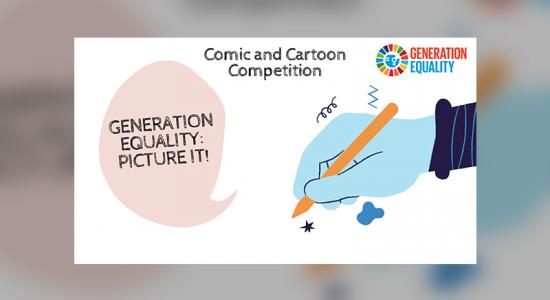 The Comic and Cartoon Competition « Generation equality: picture it! » is inviting young people worldwide to share their vision of a gender-equal generation in a drawing. The Competition is part of the UN Women campaign “Generation Equality: Realizing women’s rights for an equal future”. The Campaign celebrates the 25th anniversary of the groundbreaking Beijing Declaration and Platform for Action that set out how to remove the systemic barriers that hold women back from equal participation in all areas of life-avisionary agenda for the empowerment of women and girls.

The three winners will get the chance to attend the virtual opening of the Forum in Paris. In addition, an exhibition with the cartoons from all finalists will take place during the Generation Equality Forum in Paris (in situ/virtual, depending on the situation). Furthermore, the winners will have their work featured on several platforms, websites of other official partners and their respective social media channels.