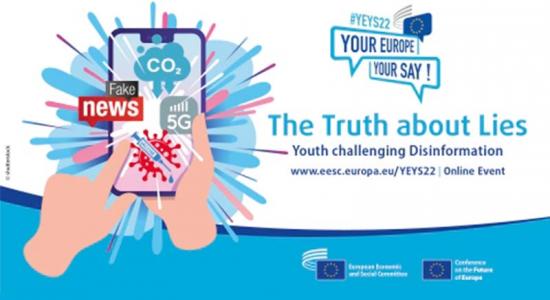 Your Europe, Your Say (YEYS)

The European Economic and Social Committee is organising the 12th edition of « Your Europe, Your Say », a simulated youth plenary session allowing secondary school pupils from any EU Member State and from the official EU candidates countries (Albania, the former Yugoslav Republic of Macedonia, Montenegro, Serbia, and Turkey) to learn about the EESC and its role, and to exchange views and propose recommendations on a specific subject. The theme for this year is « The Truth about lies. Youth Challenging Disinformation« , to raise awareness of the dangers of disinformation and to encourage the participants to become more active in the fight against fake news.

This year’s YEYS will model the build-up and development of a fake news campaign, and the identification of tools and arguments against that. Working in small groups within workshops, in a negotiation and debate format to reach consensus, we will aim to raise awareness about the way social agreements are reached between groups of separate interests.
The participating students will come up with recommendations that will be submitted to the European institutions and discussed during conferences around Europe throughout the year.

How to apply
To apply a school must:
– be a secondary- level school, of any type, with pupils of 16-18 years of age;
– be located in an EU Member State or in one of the candidate countries, or be one of the Brussels-based European schools;
– be recognised by the education authorities in their countries;
– have a computer (to read and print PDF files), with internet access and email;
– choose one teacher and three pupils who are able to express themselves in English;
– agree that the three selected pupils and one teacher will take part in the event during school time;
– ensure that the three selected pupils each have a computer/laptop or a tablet with internet access
– consider and discuss the topic of the event in class before the virtual event;
– host one EESC Member for an information session on the EU and the EESC, provisionally between January and February, (travel expenses of the EESC member to be paid by the EESC).
– inform the selected pupils, their classmates and possibly all pupils at the school of the possibility to follow the preparations for the event and the event itself on Facebook, Twitter and Instagram.

Deadline for schools to register: 2 December 2021.
Only one registration form per school will be accepted.

After registration has closed, one school from each of the EU Member States, along with a school from each of the candidate countries, will be chosen.
The selected schools will then choose three students pupils in their penultimate year of any type of secondary education (aged 16 years) to represent them, as well as a teacher who will accompany them.
These people will have to be able to express themselves in English.

For reasons of gender equality, the pupils selected should not all be of the same sex (unless they are from single-sex schools).
Schools must ensure that disabled pupils are also able to take part in the event.