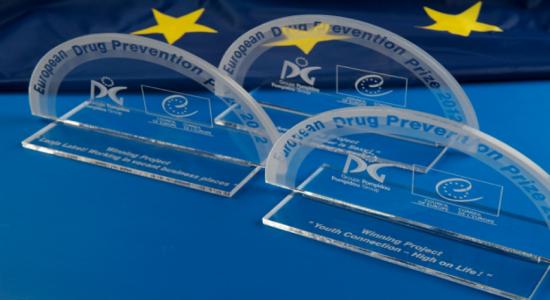 The Council of Europe – Cooperation Group to combat Drug Abuse and Illicit Trafficking in Drugs (Pompidou Group) awards every two years the European Prevention Prize to three active youth drug prevention projects. The aim of the Prize is to encourage the development of quality drug prevention work that involves young people. The Prize will be awarded to up to three youth projects that will each receive a monetary benefit of EUR 5000.

Definition of ‘drugs’: illegal drugs; alcohol; tobacco; volatile substances (glues, gases, aerosols, etc); new psychoactive substances (NPS, including so-called ‘legal highs’); and prescription and over-the-counter medicines when they are misused. However, it is likely that successful applications will have an explicit drug prevention orientation in their objectives.
With ‘drug prevention’ is meant: the prevention of the misuse of drugs by a range of methods. Interdiction (the control of supply by law enforcement, etc) and treatment activities are not included.
With ‘young people’s participation’ is meant: the active involvement of young people in the work of the project.

Prize money has been fixed at EUR 5000 per winner. The Prize will be awarded during a Pompidou Group Meeting marking the 50th anniversary of the Group in autumn/ winter 2021.

Drug prevention-related projects are invited to be submitted to the Jury via the Pompidou Group’s Secretariat. The entries will be judged by a Jury composed of seven young people from the Pompidou Group Member States.