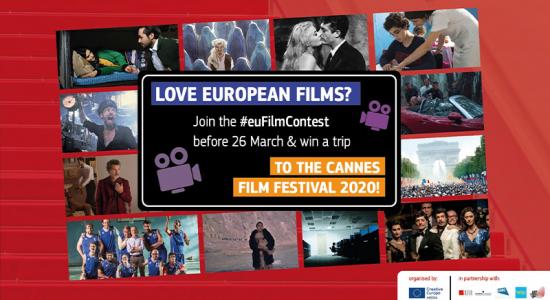 As a result of the spread of the Covid-19 Virus, the organisers of the Cannes Film Festival have announced that the festival won’t take place during the initial dates (12-23 May 2020). They are considering several options and the festival will most probably be postponed to a later date (end June, July, or even later depending on how the situation evolves). In this context, the deadline to participate has been extended to 30 April 2020.

How much do you know about European Films? Join the competition, test your knowledge and get the chance to win a trip to the Cannes Film Festival in May 2020.

Who can participate
Any permanent resident of the EU is eligible to participate, as well as permanent residents of countries that had formally signed an agreement to participate in the Creative Europe MEDIA programme not later than 31 December 2019 (Iceland, Norway, Albania, Bosnia and Herzegovina, the Former Yugoslav Republic of Macedonia, Montenegro, Republic of Serbia, Georgia, Moldova, Ukraine and Tunisia);
Participants must be at least 18 years old (on 26 March 2020);
They must be free between 15 and 17 May 2020, the dates on which the winners will be travelling to Cannes.

How to participate
Answer the quiz to test your EU films knowledge;
For every correct answer entrants get one point, they will earn an extra point if they follow @MEDIAprogEU on Twitter and/or @CreativeEuropeEU on Facebook (maximum one point). If they do, they should make sure to mention their social media account in the contact form.
Entrants may submit up to three entries, but can only win once.

Prizes
Return ticket to Cannes, France, for 10 winners from any of the above countries and two nights accommodation arranged by the organisers.
Winners are responsible for any other costs and arrangements, including health insurance, travel in their home country and travel visas if needed.
Among other activities and meetings with industry professionals, winners will attend two screenings of films selected as part of La Quinzaine des Réalisateurs/Directors’ Fortnight and Semaine de la Critique/ The International Critics’ Week. They will also receive a festival badge that gives them access to the festival premises.